The quote holds true for Shobhit Tiwari, a 23-year old  Jaipur-based who, led by his passion created history by making a Guinness World Record for Most Number of Light Orbs i.e. 900 in a Single Photographic Image. Shobhit & his team broke the record of an American team by a massive difference of 700 orbs thus becoming the first Indians to do so. This World Record holder marked Jaipur at global front & gave it an identity written in golden words & which will inspire the future generations to contribute something to their city.

JCB: Throw some light on how you made it to the Guinness World Records ?

ST: It took six months of  hard work , planning & years of practice along-with designing our own tool which was first of its own kind. Since we were not happy with the results of our first attempt & wanted to break the previous record phenomenally, we reinvented our idea & its execution. It worked in our best interest & we established a new benchmark for photographers aspiring to break the record.

JCB: What is LPP ? When & how did you develop an interest in it ?

ST: Light painting is a technique of  long exposure photography where you capture the motion of light to create different images. Analogically speaking, it is similar to painting where Darkness becomes the canvas & the light source becomes the brush.

It was in late 2013, when I was left awestruck by a stunning LPP on Internet that my curiosity took me over & I started researching on this technique. I was so mesmerized that I couldn’t believe such an image could be produced without using Photoshop.

But, once when I started doing LPP & got the desired results, I was convinced that this is what I want to do & the fact that a great painter, Picasso was also associated with technique & incorporated it in his paintings inspired me to do something extraordinary.

JCB. What are the Real World implementations of LPP ?

ST: Light Painting has quickly gained recognition on an International level & is being used by world’s biggest corporate houses like Microsoft, Apple, Nike, Red Bull, Honda etc. In India too, we are trying to promote it on many levels & I am happy to say that now, people as well as different stakeholders are trying to incorporate it in their ventures.

JCB. What was the reaction of your folks when you told them about your passion ? Were they supportive ?

ST: There is a funny story behind that. Initially, my family was unaware of the fact that I was secretly practicing Light Painting in the basement of our house but once they got to know what I was doing, they were greatly excited & extremely supportive especially my elder sister, who gifted me my first camera & always encouraged me to do something great. Even my friends got fascinated by this entirely  new dimension of photography I introduced them to.

JCB. What are the equipments required for creating an LPP? How did you arrange the tools for creating different images ?

ST: Tripod is a must. Then comes the shutter release, flashlights, different colored LEDs etc. Lately, I have been designing my own tools to create desired shapes. These include Dome tool, Light Wand, Flexi-glass made by soldering LEDs.

JCB. Are you into teaching light painting as well ?

ST: Yes, I have been conducting workshops to educate people about Light Painting techniques, the most recent & successful being the one at Jodhpur InstaMeet where the amazing response of audience, the perfect synchronization of members, inspired me to hold many more workshops for beginners as well as Light Painters who wish to learn at an advanced level. The goal is to make LPP familiar to everyone who loves Light, Art & Photography as this is an exceptional skill to possess.

JCB. Can you suggest a few Camera Settings & simple techniques for our readers trying to do LPP at home ?

ST: You can start with very simple tools such as keychain LEDs, mobile torch, toy lights etc. Usually, the camera is in Manual Mode & the settings are:

Once you get to know the technique, you can vary these values as per the light source.

You can connect with with Shobhit Tiwari on social media: 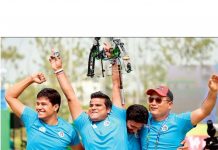