Jaipur is the capital of Rajasthan. The city shines brighter than the rest of the developing urban cities of our Nation. Known as ‘Pink city’ the city is renowned for its magnificent forts, archaic traditions, mouthwatering dishes, vibrant colours and capturing beauty and it’s predominantly shaded pink walls, justifying the name Pink City. 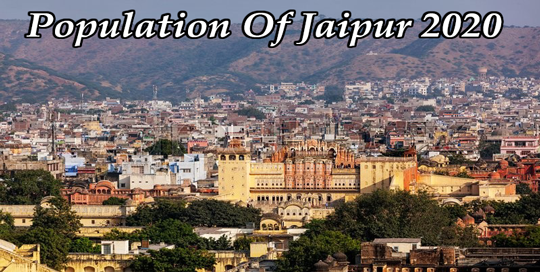 The city is a well-known tourist place in the country which catches not only country wide attention but also well appreciated internationally. It has been recently titled as the UNESCO world heritage site for its traditionally crafted beauties.

Population Of Jaipur In 2020

Jaipur is mostly filled with Hindus, however there are many chunks of other religions are seen in varied areas but is majority of Hindus. As indicated by the 2011 evaluation, Hindus cover a major fragment nearly around 78% which is further followed by 19% Muslims, 2.2% Jainis and 1.2 % miscellaneous. The general literacy rate of the city is 84%. The sex ratio lands nearly around 898 females for 1,000 males.

Population Density and Growth Of Jaipur

According to the recent research the population Density of Pinkcity has turned out to be  about 6500 people per square kilometer. In the year 1950, the number of inhabitants in Jaipur were 294,021. In over the city has grown and nourished well by the availability of resources and has touched the number of 3.44 million by 2015, making some amazing progress. In 1900, the number of occupants were nearly 160,000. The graph of the city’s population has flourished remarkably and one of the crucial reasons behind it’s development is the consistency of individuals moving here in order to sustain a better life.

Popular Shopping Malls in Jaipur to Cheer up Every Shopaholic

Chokhi Dhani – A Luxurious Heritage in Elegance of Jaipur

Night lovers ! We have something for you…

Surprise! Dunes Music Festival 2017 is here. Are you ready for...