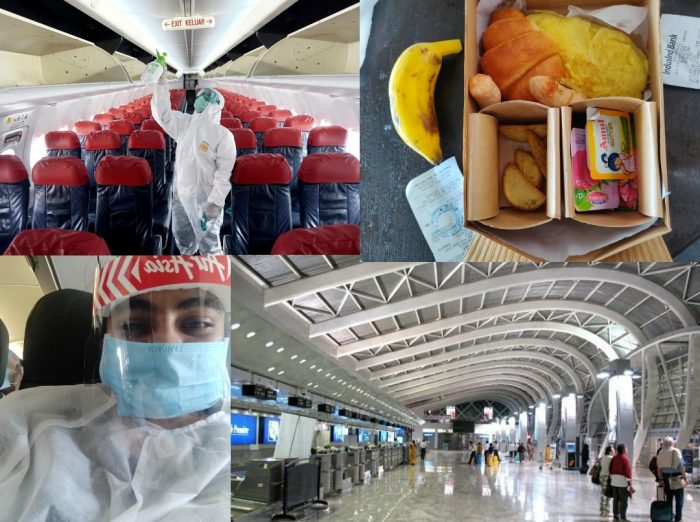 Passenger Traveling in COVIDtimes: The spread of COVID-19 has us all brimming with questions especially when it comes to commuting. Although we’ve entered the phase of Unlock 1.0 and many restrictions are uplifted. Still many are muddled as to what to follow and what not to follow while traveling. For the past weeks, the tickets are dramatically varying from cheap to expensive and flights are either canceled or rescheduled. In order to have a better idea about travelling during COVIDtimes, we have a passenger explaining her travel experience.

17 Questions Answered By A Passenger

Here’s a quick interview of one of the passengers who came from Bangalore to Jaipur via a flight. Because well we all are somehow curious to know what is the ‘new normal’ procedure to travel. Aren’t we?

Q.1 How did you book the tickets and was the procedure hassle-free?

One can book the tickets normally from the airline’s website or other websites like Goibibo, Yatra, Happy easy go. I booked mine through Flipkart. In case your previous booking has been cancelled you’ll be given credit shells from the airlines that you can use to book another ticket and these are valid for 1 year.

Though not with me, my friend who booked a ticket to Udaipur (from Bangalore), her flight was cancelled. She did not get the credit shells within a day, so she called up the customer care (indigo) and they booked another flight for her to Jaipur for the next day at the same price. That flight was not listed anywhere on the internet though.
P.s : There are high chances of flights being cancelled

Q.2 Prior to the journey was your flight cancelled or rescheduled?

No, in my case it was neither cancelled nor it was rescheduled. I guess this was because Jaipur is a capital city but I have been seeing flights being cancelled in case of other small cities like Udaipur.

Q.3 Were you asked to attach a medical certificate while booking?

No, there were no certificates asked while booking.

Q.4 Were you able to track the status of your flight once booked?

Yes, I was able to track the status of my flight (Air Asia). In my friend’s case, where her flight (Indigo) was cancelled, she did not receive the credit shell and also the status was still shown as “upcoming” instead of cancelled which created a lot of confusion.

Q.5 Usually it is suggested to reach the airport at least 30 minutes prior to the check-in and other formalities. Was there any change in that?

Yes, there are a few changes here. It is mandatory to do a web check-in (you can do it between 48- x hours) before the flight. According to the guidelines you are required to reach the airport 2 hours prior to the boarding time. It is required that you put your details (Name, PNR, contact) and paste it on your luggage. It almost took me an hour after reaching the airport to do all the formalities before check-in.

Q.6 Did you carry the COVID safety kit (mask, gloves, PPE kit) or you were asked to buy?

Yes, It’s mandatory to wear masks at the airport. Many people were seen wearing PPE kits too. For your personal protection, it is suggested that you carry full protection, masks, gloves, etc. Sanitizer stations are available at every second point at the airport (this was noticed at Bangalore airport, didn’t really witness anything like this at the Jaipur Airport)

Q.7 Usually there is a hustle at the airport, was this any less or more this time?

There was a long queue before entering the airport practising the social distancing norms. There were markers on the floor so that the passengers maintain a safe distance. Everything was manual from taking out the bag tags to sending the bag in check-in. At the Bangalore airport it was fine, but as soon as we landed in Jaipur, saw a lot of hustle near the baggage counter.

Q.8 Did your fellow passengers adhere to norms of social distancing while standing in queues? or the security had to keep a watch?

In Bangalore there were strict markers on the floor and people were following it too. After landing in Jaipur nothing as such was seen and there were no precautions from the authorities and the passengers as well to maintain social distancing.

Q.9 Was the seating arrangement different than the usual in the flight?

It was almost the same, it was in the news that the middle seat would be kept vacant and the cabin would not be open to keep the luggage and you have to keep it under the seat but I didn’t witness anything as such. I was given the middle seat. The only difference was the middle seat passengers were given extra protection ( a coat/ jacket kind of thing in a non-woven material). It wasn’t exactly a PPE suit as it didn’t cover the head and legs. All the other passengers were provided with a safety kit which included hand sanitiser, mask and a face shield.

Q.10 Usually there is a blend of age demography, how varying it was this time?

It was a blend, but there were more people in the age of 20-35 probably the students and the working officials who would be heading back home. I saw a few old people and kids too in the flight.

Q.11 Bangalore-Jaipur is a long flight, so did you carry any munchies, or were they given? While eating how did you manage your COVID safety kit?

At the lounge, the buffet was not available and they had packed meal options in both veg and non-veg. Alternate seats were kept vacant in order to maintain social distancing. 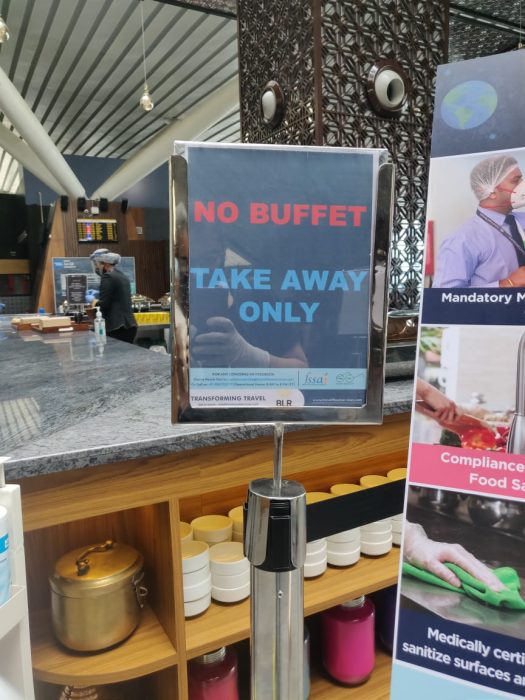 You are allowed to carry your own food and water inside. My bag was full of munchies and no one objected it during the security check, however, I didn’t use it during the flight. While booking the tickets, you get an option to book your meals too. It can be done 24 hours before the flight.

Q.12 Was there a halt in between? If there was, how long was it and what did you do in the meantime?

Yes, there was a halt at Pune. It was a 30 mins halt for refuelling. Passengers going to Pune deboarded there and who wanted to go to Jaipur boarded the flight. Once the passengers deboarded, the seats were sanitised. We were not allowed to leave the aircraft in the meantime. Before taking off there was again a check and we had to show our boarding passes again.

Q.13 How many times did you sanitize during the journey? Was it out of choice or out of compulsion? 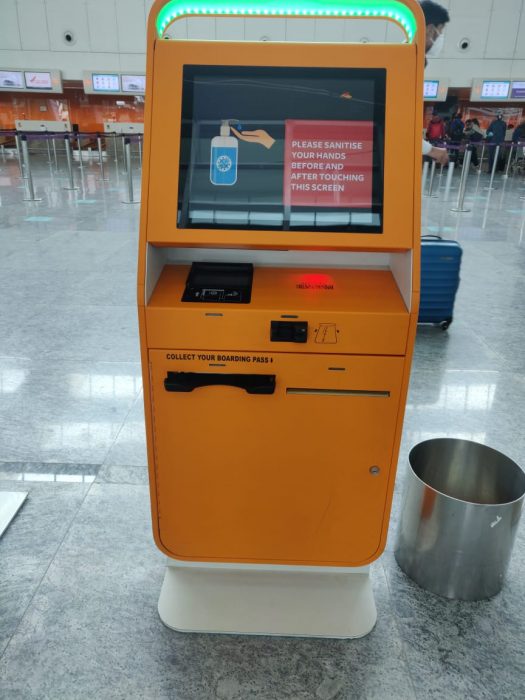 I sanitized more than 30 times after entering the Bangalore airport and leaving the Jaipur airport. At a few points, it was mandatory like in the lounge. While I handed over my card and got it back I was asked to sanitise my hands before entering the lounge. There were sanitising stations at every point in the Bangalore airport and it was a choice to use them or not. I didn’t see any such facility at the Jaipur Airport.

Q.14 Once reaching Jaipur airport did you remove the COVID safety kit?

I only removed the safety kit, that too the coat that was provided by the airlines, the face shield, mask, and gloves. There was a dustbin marked for these items separately and hence I dumped them there and put on a new mask before leaving for my home.

Q.15 How many times were you tested during the whole journey?

I was not tested for COVID-19 throughout the journey. I had a temperature check once I was entering the lounge, ideally, they should check it before entering the airport. Before boarding the flight, our temperature was recorded and was manually noted too.

Once we landed in Jaipur, we had to fill a form providing the information where we came from and where we are heading to. We had to submit the form at the exit. There was a team of doctors ( I suppose they were doctors and nurses because of their clothing ) who checked our temperature again and put a seal stamp on my wrist. 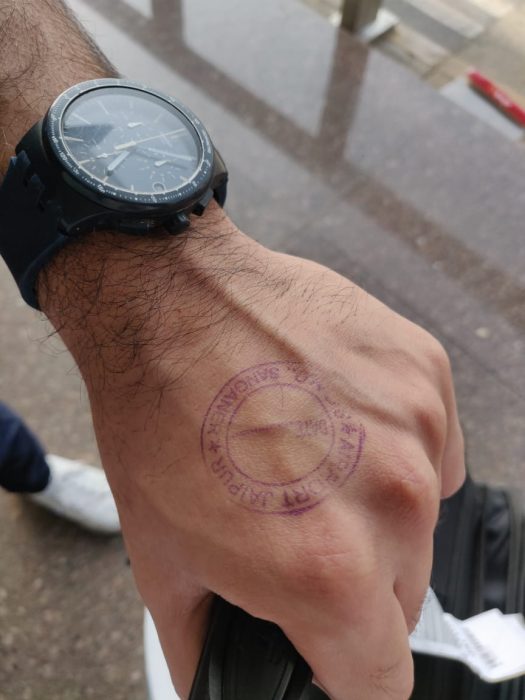 I was asked if I had any symptoms like cold fever etc and when I said no, I was asked to be under home quarantine for 7 days.

Q.16 Did you face any issue related to baggage?

This created a lot of confusion to me, as my ticket stated I was allowed only 15 kgs of check-in luggage but in the guidelines from the aviation ministry it was mentioned 20 kgs. I called up the customer care for some clarity but no response. I got a message a few hours before the flight which stated that I can bring up to 20kgs in check-in. Unlike the usual times, there is no crew member to collect and weigh your baggage. There were machines, you have to scan your boarding pass and it would dispense out the bag tag. Place your bag on the machine, it’d show you the weight of your bag. If it exceeds more than 20 kgs, it’d show an error and you’ll have to go to another counter to pay extra. 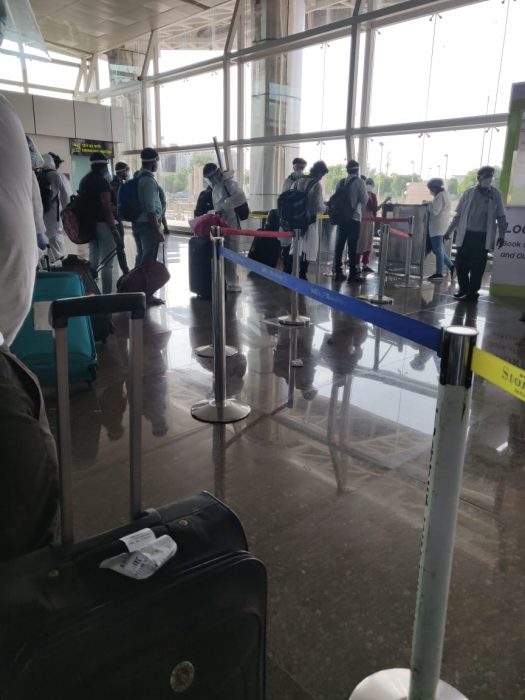 My brother paid almost 1500 for extra 3 kgs. It may vary in different airlines. If your bag weight is less than 20 kgs, It’d dispense out a slip and your bag would automatically be moved forward through the conveyor belt. There was no crew to take the bag but there were officials standing near the machines to assist. My cabin baggage weight was not checked.

Q.17 How were things at the Jaipur Airport?

Jaipur airport was pathetic. There was no social distancing. No measures were taken by officials to check. No information about the quarantine, no declaration forms that a person would be going under self-isolation. All we were asked to do was fill forms, there was a table where pens were kept. This is a very easy way in which a virus could spread through pens because multiple people would be touching that. 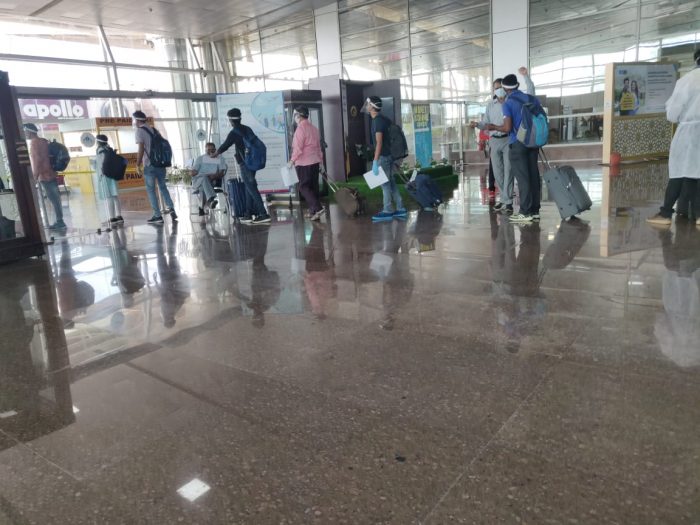 Security Check: There was nothing unusual. It was the same as the regular security check. No manual checking of the id proofs. But there was a counter which had a glass partition which had a scanner on one side and the security official standing on the other side. We had to scan the boarding pass and he’d verify it. I had to show the id proof through the glass (it had some magnifying screen)

Boarding Pass: taking a printout of the boarding pass is not mandatory, we didn’t. I scanned it through my phone so please save paper. 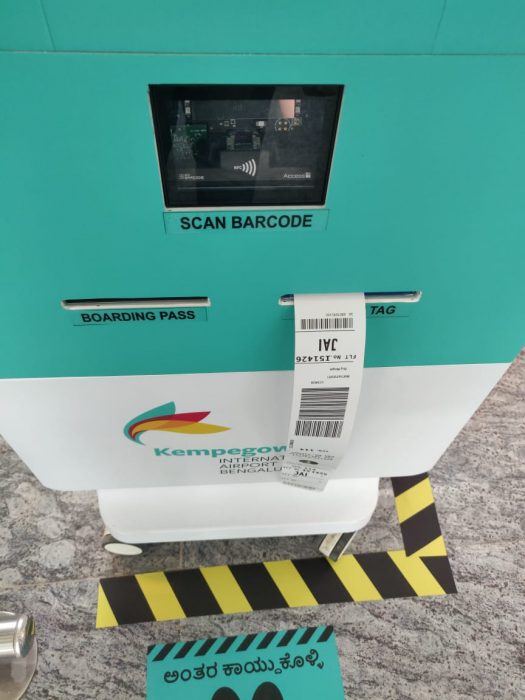 Sanitization: there should be a sanitizer box outside the washroom as people would be touching the handle to open the gate. But there wasn’t any.

Get back to us if you’re curious to know more about the ‘new normal’ procedure of traveling. Meanwhile, we urge you to avoid leaving the house as much as you can. Again, the pandemic isn’t over yet we’ve just entered the phase of Unlock 1.0. Stay home, spread positivity, and keep paying gratitude to the noble workers. Don’t forget to sanitize!

8 foot overbridges to come up in Jaipur.

Dzinography – An Array of Handmade Gifts in Jaipur

Man who tried to abduct girl in Gopalpura arrested.

Perturbance caused since the verdict came and how the nation should...