The term “Jantar Mantar” literally means “instruments for measuring the harmony of the heavens” or one can also say a calculating instrument. In Jaipur there are varieties of palaces, temples, gardens and ponds they all have their importance in their place but this astronomical observatory established by the king Sawai Jai Singh have it’s own International importance. This archaic yet popular architecture houses various architectural and astrological instruments that have caught the interests of astronomers, historians and architects around the world. It is considered to be one of the largest observatories ever built. Jantar mantar is the most unmitigated and best preserved great observatory site built in the Ptolemaic tradition. It provides an outstanding corroboration of the scientific and technical conceptions of the great observatory devised in the medieval world. All the credit and appreciation goes to the one person, The Maharaja Jai Singh II who contributed this  astonishing work in the year 1734.

THE STRUGGLE BEHIND THIS MAGNIFICENT ARCHITECTURE

It took  nearly seven years to finish the task. The Maharaja built the first stone observatory in 1724 in Delhi. The Jaipur observatory of Rajasthan was built in 1728-1734. The Maharaja Sawai Jai Singh built three more observatories in various places. The Jaipur observatory is the largest and most accurate in comparison to others. It is the largest observatories among five and best preserved and also still running. A complete collection of 19 architectural astronomical instruments. It features the world’s biggest stone sundial “Smarat Yantra”, and is UNESCO World heritage site. The one observatory in Mathura has almost disappeared today.Total of five such observatories were built  in New Delhi, Jaipur, Ujjain, Mathura and Varanasi. But the one living in Pinkcity is the largest and still shining bright amongst the rest.

WHY WAS JANTAR MANTAR BUILT ?

The builder of the Jantar Mantar Maharaja Sawai Jai Singh was a brilliant star and a great scholar of his subjects like astronomy and Indian politics. He was also the ruler of Amber and founder of Jaipur, a great builder and exceptional astronomer. Sawai Jai Singh II was commissioned by Emperor Muhammad Shah, to make corrections in the astronomical tables and to confirm the data, already available on the planetary positions.

Jantar Mantar is an amazing example of observing universe, beliefs and societies together. It comprises the instruments that are largest of their category. It signifies the technical brilliance of the medieval world.

Jantar Mantar, situated at Jaipur, is the largest stone observatory in the globe. And one of the five astronomical observatories constructed by the founder of Jaipur- Maharaja Jai Singh. The name ‘Jantar Mantar’ is taken from the Yantra Manta, a Sanskrit word that refers to instruments and formulae. The ‘Yantra Mantra’ factually denotes ‘Magical Device’.

INSTRUMENTS USED IN THE OBSERVATORY 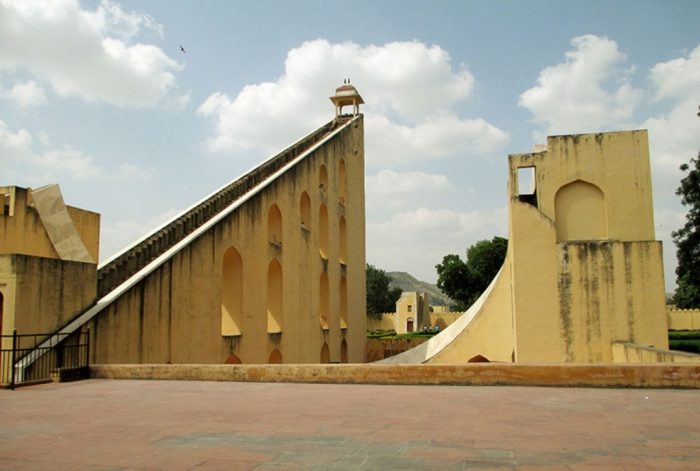 The Vrihat Samrat yantra is a sundial that can give the local time to an accuracy of 2 seconds. Restored A.D. 1901 tested by jotshi Gokul chand bhawan for finding time and declination and hour angle of the heavenly bodies. It is the largest sundial ever built with a gnomon arm 22.6 meter high and largest quadrants of radius 15.5 meter. The shadow of the triangular wall, which is placed in the north-south direction with an angle equal to the latitude of this location moves equal distances in equal time intervals, on the eastern and western side quadrants. This movement is calibrated to read the local time. The western and eastern quadrants are divided into 6 hours each, for the morning and the afternoon segments respectively. Each hour is divided in 15 minutes and later in 1 minute parts. The minute part has ten subdivisions each of 6 seconds each of which again has three small divisions of 2 seconds each. The correction factor which is displayed to convert the time obtained from this instrument to the clock time. 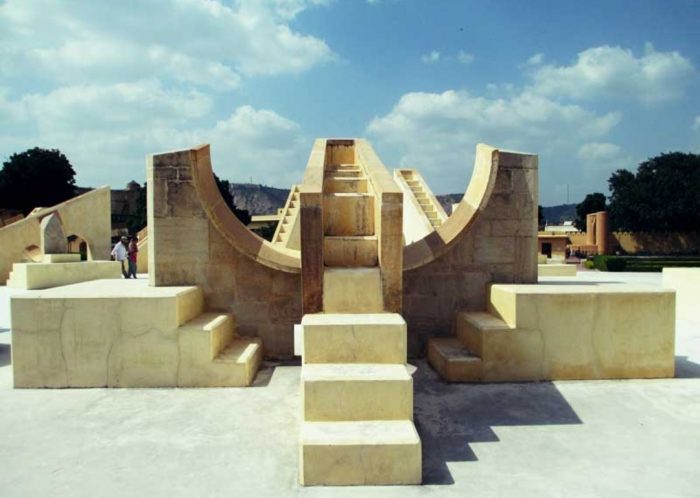 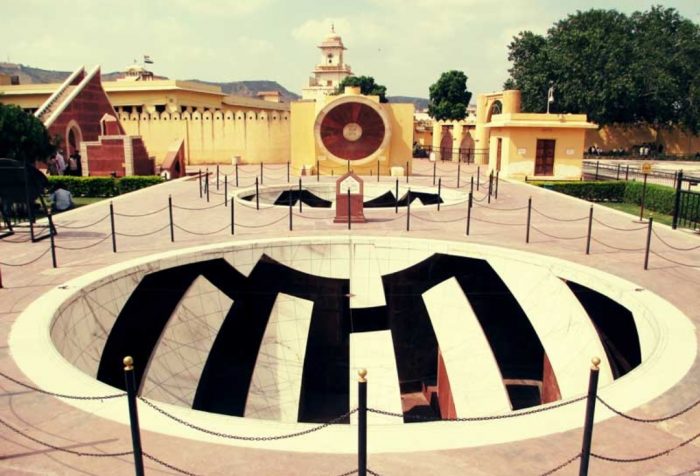 It is a representation of half celestial sphere rim represents horizon for finding all the positions of the heavenly bodies. 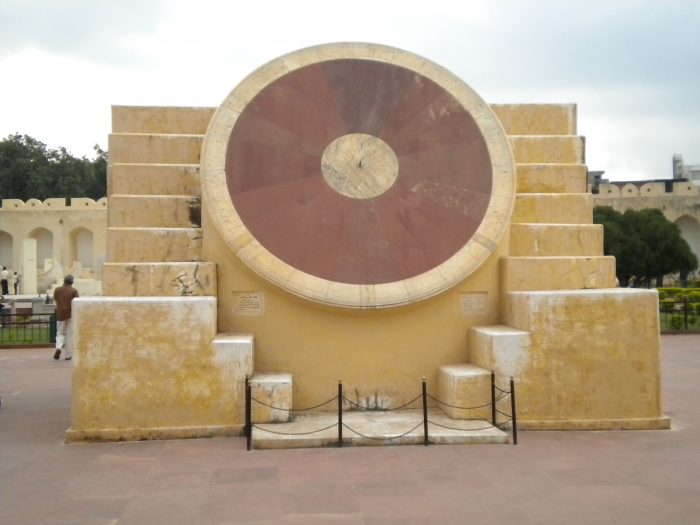 The narivalaya has two circular plates, facing north and south which are its dials. The wall of the plates is inclined towards the south at such an angle that the instrument remains parallel to the plane of the Earths equator. 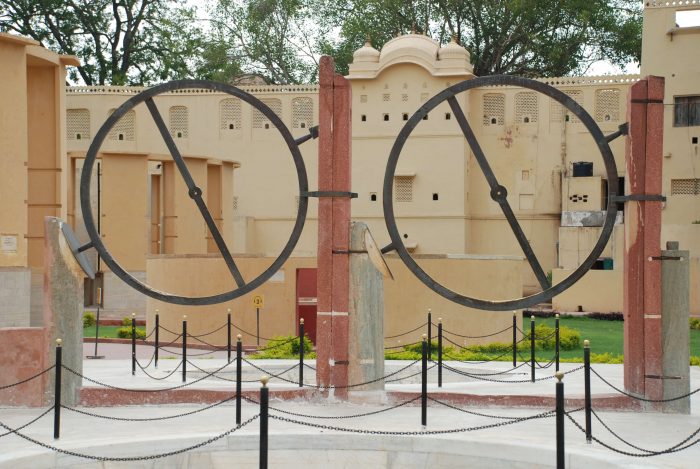 The chakra yantra is a ring instrument which measures the global co-ordinates of declination and the hour angle of a celestial object. 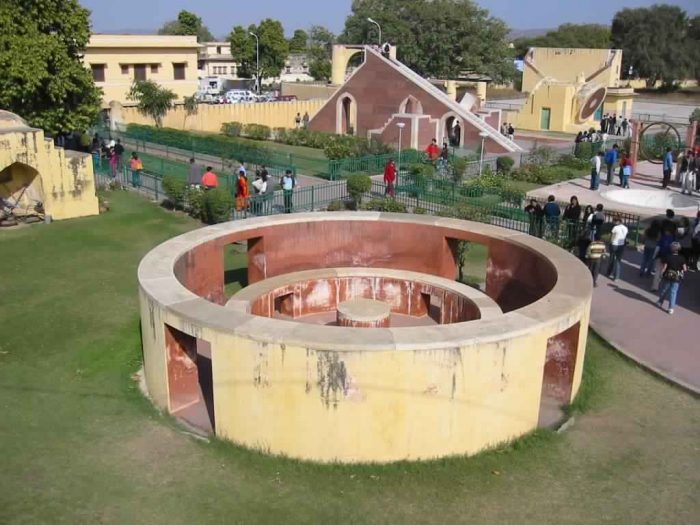 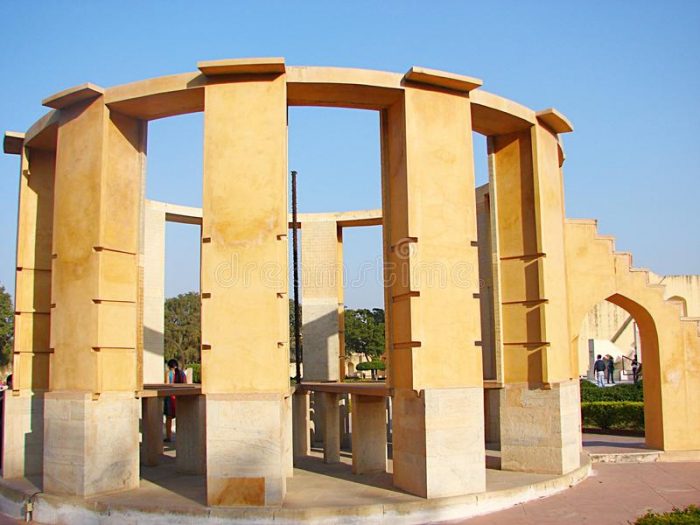 The Ram Yantra can measure the local co-ordinates of altitude and azimuth of a celestial object. 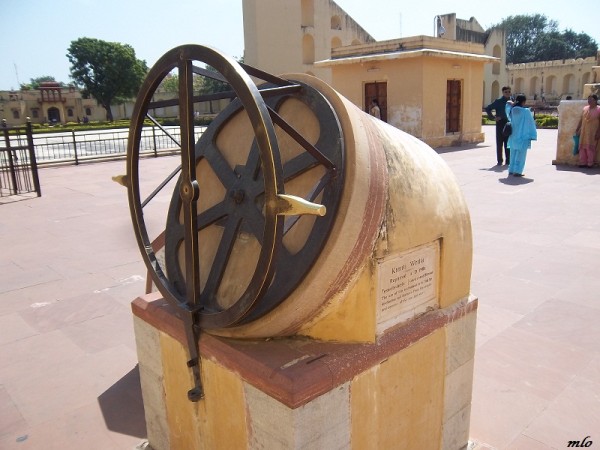 The use of this instrument is to find the declination and distance from the ecliptic and equinox of the sun and stars. 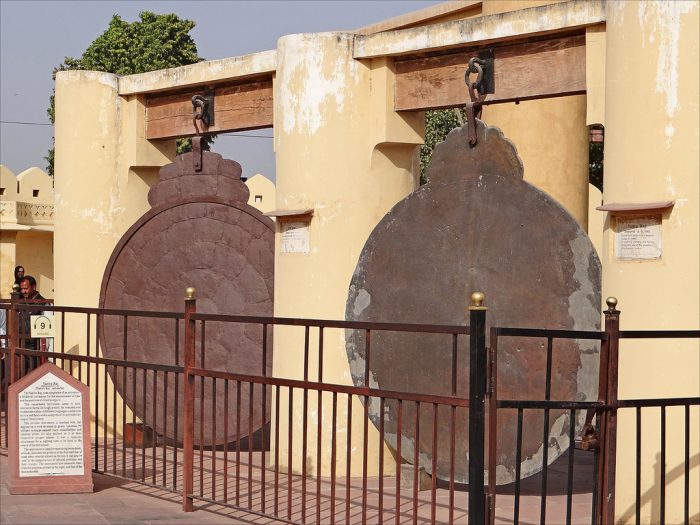 The yantra raj is an adaptation of an astrolabe a medieval instrument for the measurement of time and the positions of celestial objects.

There are many more instruments in the observatory of Pinkcity.

Ever Wondered About The Life Of Tuk-Tuk Drivers? Here Is A...

‘Choki Dhani ‘ a brimful stroke of Rajasthani culture…here is what...