Rajasthan’s Chief Minister Ashok Gehlot has expressed sympathy on the death of Inspector Vikram Singh of the state Anti-Corruption Bureau (ACB) who fell victim to the cancer on Tuesday. 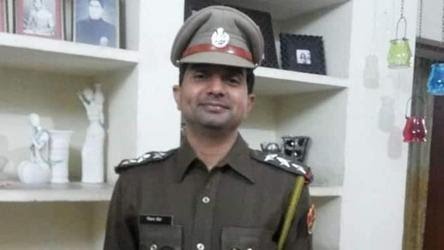 Inspector Vikram Singh was diagnosed with cancer in last year’s June. It was somewhere in January, 2002 when his father Shiv Pal Singh died on duty at Nagar Police Station in Jhunjhunu district, Vikram Singh was given a job with Rajasthan Police. He was the fourth police officer from his family and he held his duty with dignity and devotion. Posted in ACB about 8 years ago, he was appreciated by his senior officers for the tenacious efforts in the pursuit of exposing corruption.

According to Dinesh MN’s post,”In ACB, as head of technical surveillance unit of ACB, Singh was instrumental in exposing some of the biggest scams in the state, which led to arrest of senior officers of administration, police and judiciary. ACB Operations in Mining, NRHM, Ajmer Police & Judiciary, Kota Police, Narcotics, PHED and other departments which led to arrest of some of the highest level officers had Vikram listening to thousands of calls and sifting through hundreds of CDRs (call detail records).”

He lived ACB, breathed ACB and even in his dreams, only operations, numbers, surveillance, demand, delivery, arrest, search seizure haunted him,” were the words of the ACB.

After taking one round of treatment in Mumbai’s Tata Memorial Hospital, the Inspector Vikram Singh was put on ventilator in Jaipur’s Narayana Multispecialty Hospital in the first week of September. There all the top police officers of Rajasthan including DGP Bhupendra Singh and ACB Chief Alok Tripathi visited him.

All his colleagues remembered Vikram Singh for his tenacious attitude in exposing the corrupt, working long hours at the headquarters juggling with technicalities, surveillance, phone numbers.

ACB DG Alok Tripathi told the sources when he visited him in hospital, Singh mumbled to him: “I want to return to work soon—there’s so much left to solve.”

“We were sure that he would have some plan to deceive the disease and his sheer will to live and his doggedness made us believe that he would defeat the disease. That was the confidence we had in him, we believed he could do anything,” Dinesh MN said.

Dinesh even called him “not just a colleague but a dear brother who guided me in my first important posting as IG ACB in 2015”. The IPS officer, who was in jail for seven years in an encounter case, revealed that Vikram guided him in the mining operation, one of the most prestigious cases of Rajasthan ACB.

“Vikram you will inspire us every day but we will always miss you,” the officer wrote in his FB post.

Singh is survived by wife and 10-year-old son, Shaurya. His body was taken to his native village, Khudi, in Sikar district for cremation early Wednesday morning.

This salon in Jaipur will transform your look to excellence for...

Kanika Kapoor came for her holidays in Jaipur. How her friends...