“I have come to watch ‘Teej’ sawari” said one of my friends over phone. I had some work concerning him but now the work shall have to wait for next two three days.

The words ‘Teej’ sawari started echoing in my head as I had not gone to capture the colorful shots for some years now.

“You have to drop Raunak (my son) to the sports academy as I am not well” said my father.

Was it a good omen for motivating me to go and capture the world famous Teej Procession?

Well it was kind of Not. “It would take a lot of time to go there and I will not be able to get back by 7 pm, since I had to pick up my son from the academy.

A few thoughts kept flowing from one way to another, the heart said “YES” and the mind saying “NO”.

By what time would be back? A sound came from the living room as I was sipped last few sips of tea.

I am not sure as I may go to Tripolia Bazar for capturing a few shots. By that time I had made up my mind to carry the camera and take a final call of going or not after dropping my son.

Can I also accompany you? Asked my better half. This was the coup de grace to my negative thoughts.

As now I was pretty much clear in my mind that I was definitely going. We reached the site well in time and placed ourselves at a vintage point near Tripolia gate.

Jaipurites are quite aware and know the famous Tripolia gate, as this gate remains closed throughout the year and opens only for two festivals Gangaur & Teej. This is the gate through which famous Teej Mata procession passes and begins.

Teej festival which is primarily festival of women, who offer their prayers to Goddess Parvati.

The gathered crowd wait eagerly for Teej Sawari (procession) to begin. People from all walks of life come in huge numbers to have a glimpse of Teej Mata as well as enjoy some great cultural performances of dance and music.

The procession starts out from Tripolia gate at 5:30 pm and goes through Tripolia Bazaar and Chhoti Chaupar, Gangauri Bazaar, and ends at Chaugan Stadium.

The Teej Procession begins with a dance troupe announcing the beginning with aplomb. 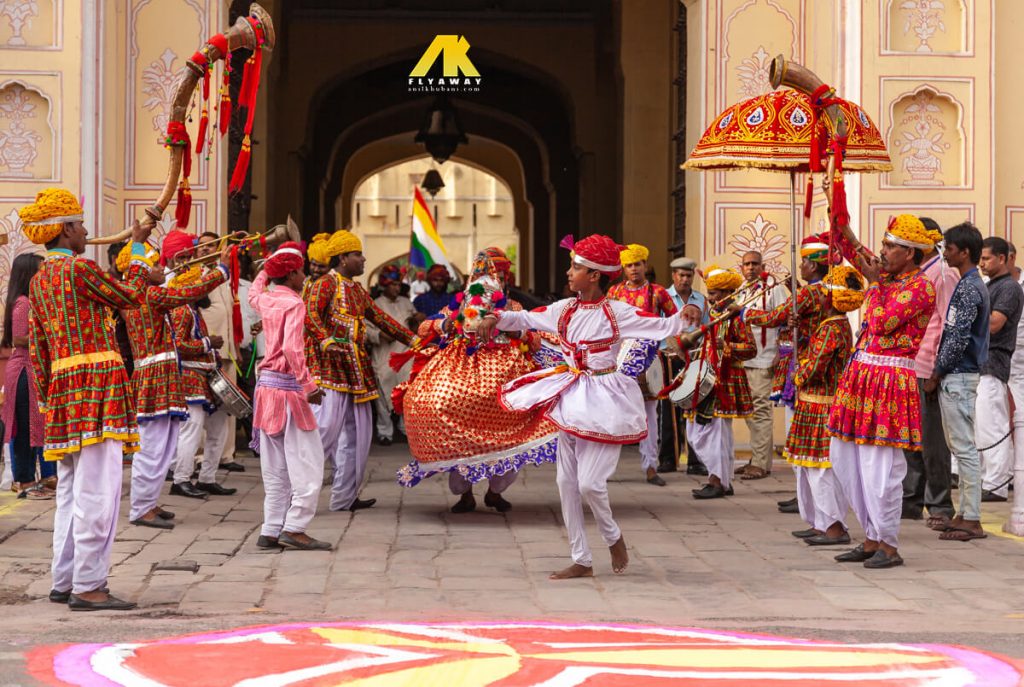 Next in line was the world famous Kalbelia Dance. The dancers are women in flowing black skirts who dance and swirl, replicating the movements of a serpent. 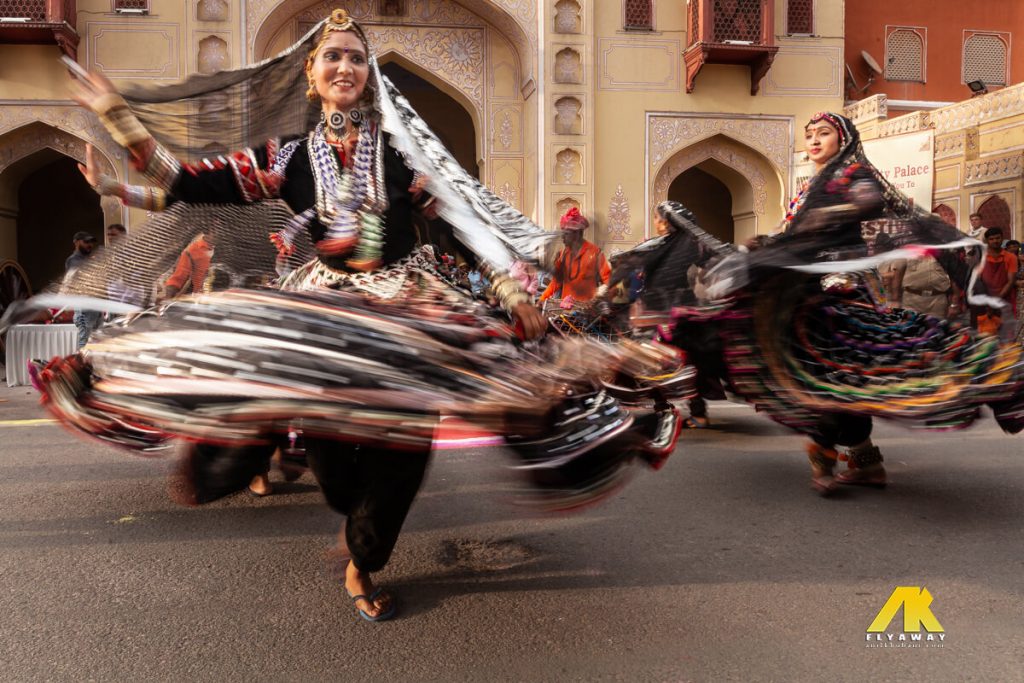 The procession walks through the lanes with people gathered on wither sides of the road. 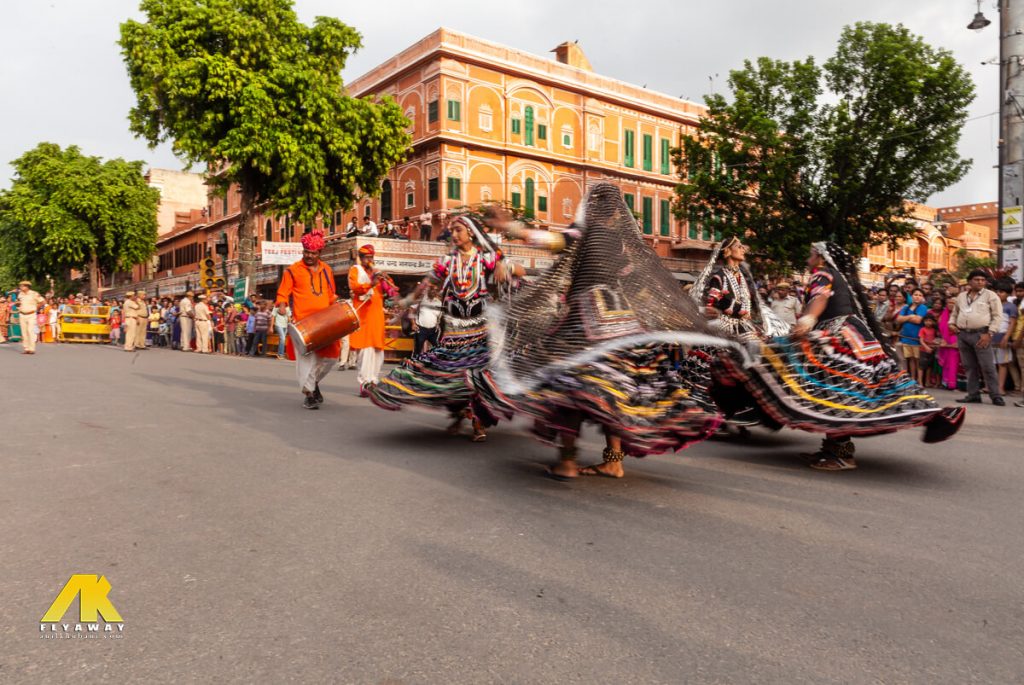 Next in line was the much famous Rajasthani Dance “घुमर”. The ladies clad in beautiful bright colored clothes come out of the gate forming a circle.  Ghoomar was ranked 4th in the list of “Top 10 local dances around the world” in 2013. The dance typically involves performers pirouetting while moving in and out of a wide circle. The word ghoomna describes the twirling movement of the dancers and is the basis of the word ghoomar. According to the traditional rituals, newly married bride is expected to dance ghoomar on being welcomed to her new marital home. Ghoomar is often performed on special occasions, such as at weddings, festivals and religious occasions. 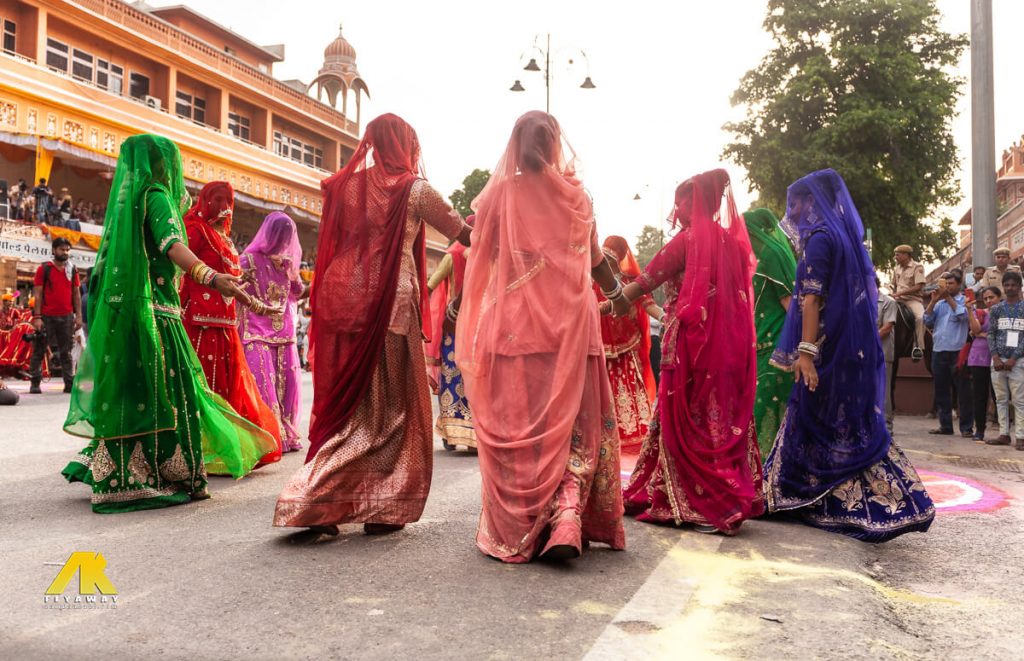 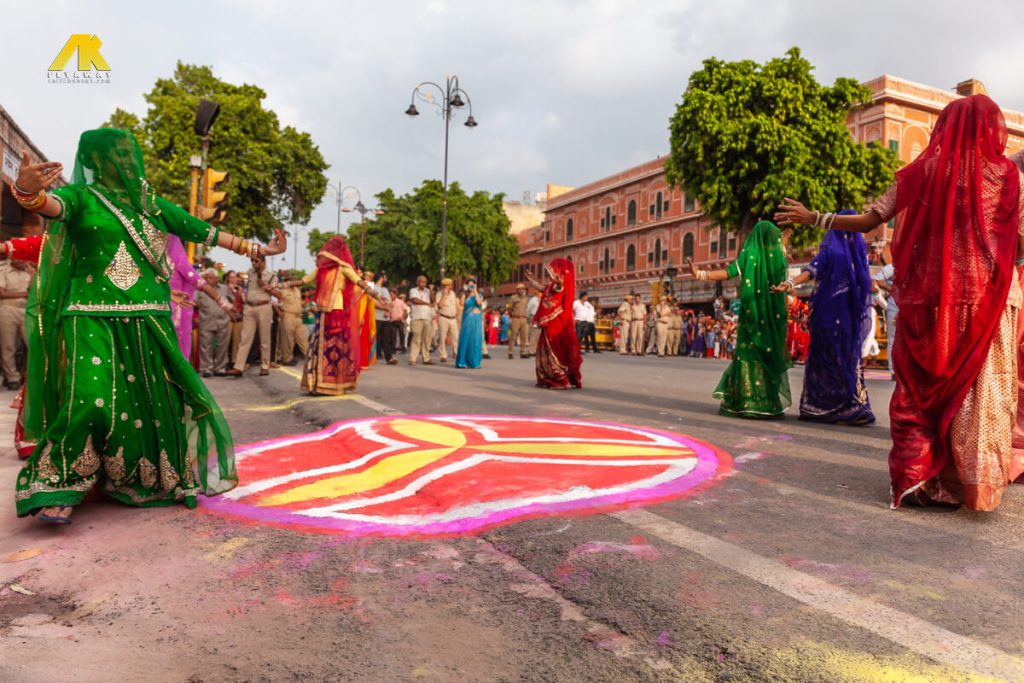 One could see variety in procession from traditional dance, music, songs to some बहरूपिया .

It was once common for behrupiyas to make a dramatic entrance at wedding or other festivities dressed as a policeman, priest, or other figure and create a commotion.

I had a close encounter with one of the behrupiyas. The only reason I captured his photograph was that I could sense an expectation in his eyes to get photographed. 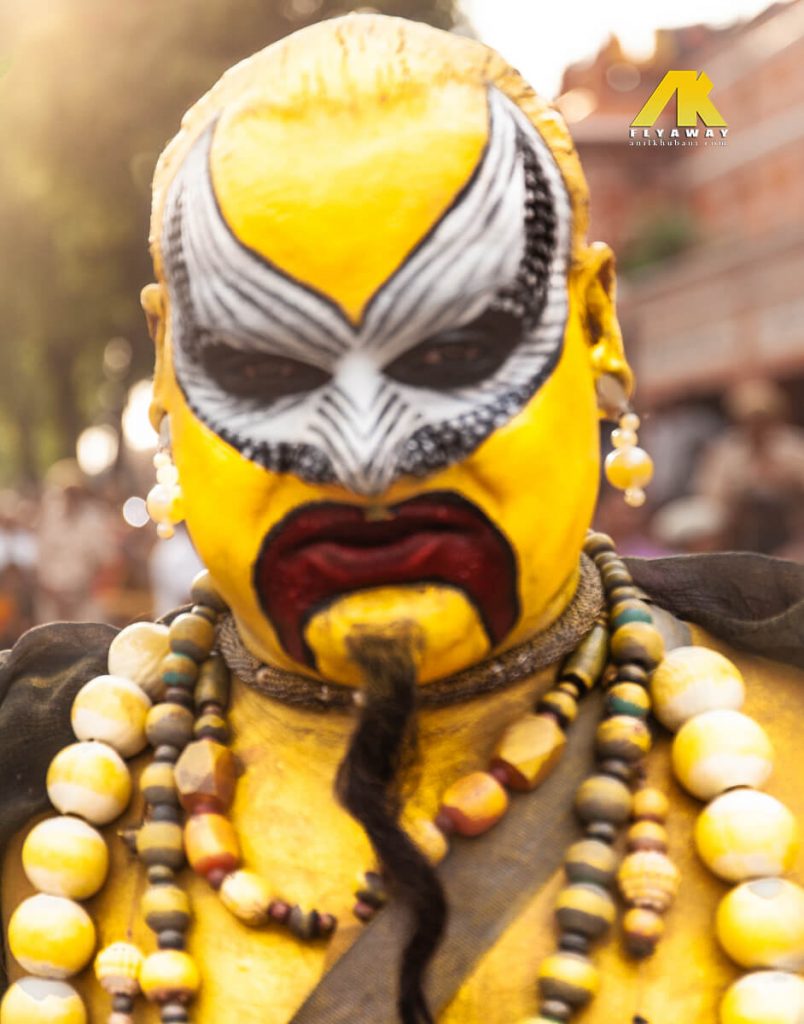 It has been customary since long that Teej Mata Sawari is accompanied by The Royal Flag of Jaipur on a gigantic Elephant (गजराज).

The mahavat (महावत) is in charge of the elephant. I had a close shave with गजराज while capturing this shot. The wait is over

One could hear a huge roar from the crowd as Teej Mata Sawari starts to roll out from the Tripolia gate. It was a sight worth waiting for. One could see Teej Mata adorned with traditional jewelry and beautifully embroidered clothes. It was having its own halo.

Lots and lots photographers and people were waiting to have a glimpse of Teej Mata from a vintage point. As the Teej Mata sawari vanishes in the lanes of Jaipur towards Chaugan stadium people start to disperse. And Tripolia gate once again rests in peace and waits for another year to open for Teej Mata sawari to pass through it. P.S. The author & photographer was captured while taking a shot He also writes photography training blogs and occasionally writes about social issues too.

He can be contacted at ak@voilaindia.com

All Photographs by Anil Khubani

Father’s day special: 7 Trending Gifts to let him know how...