The city palace in Jaipur can also be called the king zone area, a place from where the rulers used to continue and expand their empire is situated in the hearts of the city.
It is one of the best tourist spots in the entire Jaipur a grand complex including several buildings, courtyards and gardens.
One of the crucial palaces in the complex are THE MUBARAK MAHAL and THE CHANDRA MAHAL. The complete architecture is a blend of Indian, Mughal, Rajput and some are even in European styles. One can see the grandeur of the fusion in every nook and corner of the palace. The red and pink sand stone in which it is built adds a special beauty to the palace. The decorated gateways add elegance and magnificence to the structure. This Palace is a perfect example of how design, art and creativity can be moulded together to form an exquisite symbol.

– The City Palace was built by Sawai Jai Singh who is also known as the founder of Jaipur City. The credit of Hawa Mahal and Jantar Mantar also goes to him.

– Though the main architects behind the magnificent City Palace were Vidyadhar Bhattacharya and Sir Samuel Swinton Jacob, Maharaja Sawai Jai Singh also contributed to the architectural design of the palace.There are three main gates to the palace which are Tripolia Gate, Virendra Pol and Udai Pol.

-There are also four smaller gates in the third courtyard, which are believed to represent four seasons.

1. The peacock or the Mor Gate : represents the autumn season and there are 3D models of peacocks at the gate giving it a magical view.

2. The Lotus Gate was to symbolise the summer season.

3. The Leheriya Gate for the spring season.

4. The Rose Gate is the winter gate.

All these gates are decorated likewise and it is an utter delight to just look at these gates.

– There are two parts of the palace, one which is opened for the public and also has a museum, and the other for the residence of the royal family, the descendants who live here even now.

– The most populous item of the City Palace are two silver jars which have found place in the Guinness Book of World Records as the largest silver vessels in the world.

– The Chandra Mahal, Maharani Palace and the Bhaggi Khana have been converted into museums.Mubarak Mahal is a museum dedicated to royal textiles. You can see the dresses worn by queens and kings.

– The clothes worn by Maharaja Sawai Madho Singh I is quite a treat to the eyes as he was believed to have weighed 250 kgs.Baggi Khana is a place dedicated to chariots and coaches. 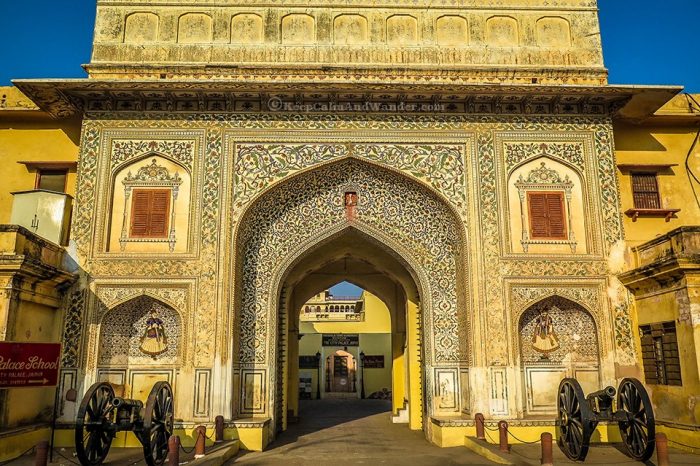 – The two prime attractions are the chariot which was used to carry the royal deity and a European Cab which was gifted to Maharaja Sawai Ram Singh II by Queen Victoria herself.The Silehkhana has a great and fine collection of weapons and handguns used during the time.

– There are swords, knives, arrows, axes, and so on. The personal weapons of the kings are also displayed here.

What to do their :

(i) Interactive learning programmes for children.

(ii) You will find another market inside the courtyard of The Palace and dig in for immense shopping.

(iii) outside shopping at the museum shops

A Majestic Dussehra Weekend Stay for Your Family!

Studio Bagru hosted a clean up project at Bagru along with...